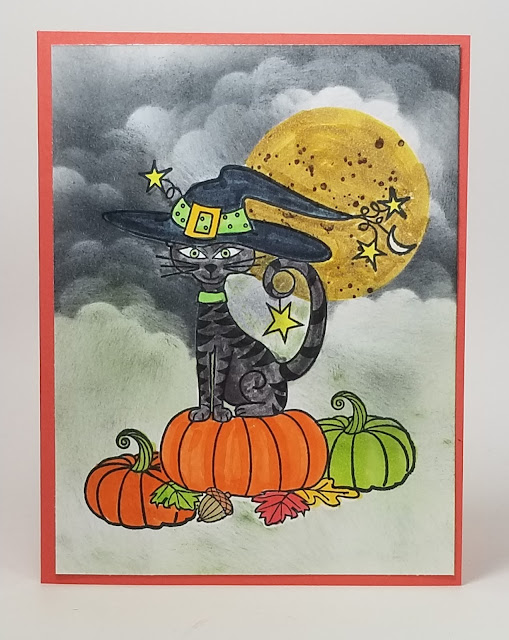 This card was made for two partnered card challenges:Double Trouble Blog Challenge #40 whose three-part themes were 1) "put on your mask" featuring different masking techniques, 2) include an image you would find in a pumpkin patch, and 3) partner with Kat Scrappiness by using a Halloween/Fall theme.

- and -Kat Scrappiness October Challenge with a theme of "Halloween/Fall".

I have this beautiful Halloween cat stamp set from Hampton Art that I bought in 2013 that I thought would be perfect for masking, and be a Halloween "Kat" card for Kat Scrappiness.

I started by stamping my cat sitting on a pumpkin onto a piece of "Masking Magic" peel-off paper using Memento Tuxedo Black ink. After the ink had dried thoroughly, I ran it through my Brother ScanNCut digital cutting machine to scan and then cut out the mask (I could have fussy cut it, but this was so much easiser!).
Next I stamped the cat image onto my main white card panel using Memento ink. After it dried, I applied the cat mask exactly on top of the cat. I also used a circle die and cut the center out of a piece of Post-It Notes sheet, and placed it in the sky area on top of the masked cat.Using a scalloped die, I diecut a piece of heavy cardstock, and using this as a mask in the sky, moved it around at different angles while sponging different shades of black using Memento Tuxedo Black ink to create a stormy Halloween sky, being sure to have a light touch around the moon.I then removed the Post-It circle, and using the "reverse masking" technique put the cut out negative (the Post-It with a hole in it) exactly on top of where the colored moon circle, used a craft sponge to sponge yellow and tan over the moon to create lighter and darker spots. I also used retired Stampin' Up! (SU) stamp set "Gorgeous Grunge" with SU Early Espresso ink to stamp random "craters" on the moon. Be sure to cover all exposed parts of your panel with additional Post-It Notes so your stamp doesn't accidentally put craters on your cat or grassy area.Before sponging the grassy area, I used Tuxedo Black ink again to stamp two pumpkins beside the larger one the cat is sitting on. If you look closely, you can see that I stamped the left orange pumpkin over the cat's pumpkin, so it erroneously looks like it is "behind" the cat pumpkin instead of sitting in front of it. What I should have done was place a pumpkin mask UNDERNEATH the cat mask before stamping the cat. Oh well, live and learn :-)I then sponged the grassy area with green ink and a light touch of black, while avoiding the two stamped smaller pumpkins (since they weren't masked).Finally, I removed the mask and used Copic markers to color the cat on the pumpkin image, as well as the two smaller pumpkins.  The completed panel was glued onto a card base of SU Calypso Coral cardstock.I dearly wanted to make the cat an orange tabby, but thought that would be too much orange, so instead made her a gray/black tabby.I am rating the difficulty on this card as a "3" out of a possible "5" because of the need to cut out masks (AND correctly place them!). To make this card even better, before I send it to one of my Grand-Daughters, I will add a little darker green shading directly under the three pumpkins to "ground" them in the image space.