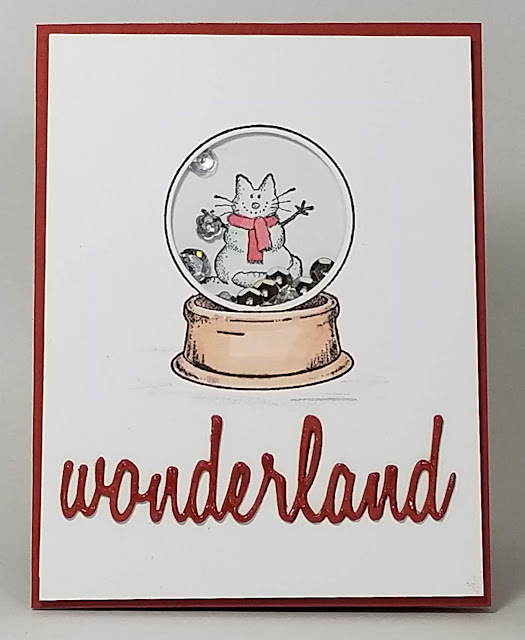 This holiday card was made with the inspiration from 52 Christmas Card Throwdown snowman theme challenge #52CCT39-19 . 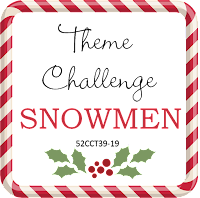 Back in 2002 I bought the cute little holiday stamp set called "Holiday Snowglobe" that features a cat snowman which I thought would be perfect for this themed challenge. I first stamped the snowglobe onto Stampin' Up! (SU) Whisper White Thick cardstock using Versafine black ink, then used a circle die to cut out the inside of the globe.After coloring the base of the snowglobe with Copic markers, I used a No. 2 pencil to sketch in the area around the base of the globe to "ground" it on the card face so it didn't look like it was floating in nothingness. The base itself was colored with two light shades of tan/brown Copic markers.I then stamped the cat snowman onto a scrap piece of white cardstock using Memento black ink, and let it dry thoroughly before shading the cat's body using a light blue Copic marker. I colored his scarf with a orange/red marker, and used a SU Stampin' Write Close to Cocoa marker to color his stick arms.I attached a small piece of acetate over the back opening of the snowglobe using double-sided Scor-Tape, then put strips of adhesive foam tape on the back of the snowglobe panel all around the die-cut opening, and around the entire perimeter of the panel. I then piled the snowman area with silver sequins and attached the snowglobe front on centered over the stamped snowman and his sequins. Note, that it's a good idea to dust anti-static powder on the edges of the foam tape before applying it, so that the sequins don't "stick" to the side of the tape when the card is shaken.The sentiment was created by die cutting the "wonderland" word three times out of SU Cajun Craze cardstock (to match the card base), then stacking the three diecuts atop one another using liquid glue. I made it "icy" looking by coating the topmost layer with Ranger's Glossy Accents. After it was dry, I glued the sentiment to the bottom of the front panel.Finally, I glued the shaker panel assembly to the card base.I am rating the difficulty of this card as a "3" out of a possible "5". The coloring and assembly were all straightforward.