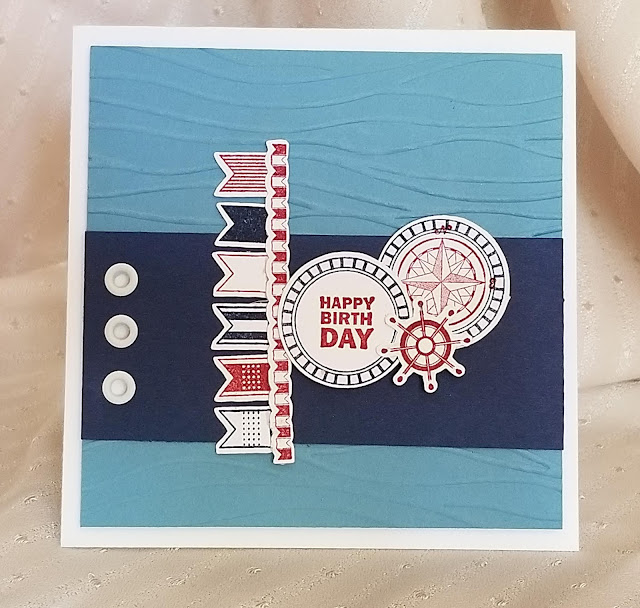 This masculine birthday card is for my BIL who has a love of anything involving water. It was made for Watercooler Wednesday WWC226 - Dawn's Masculine "Anything Goes" Challenge.

I was inspired by the beautiful "It's a CASE" card on Wendy Janson's blog.

All the stamping was done with only two colors - Stampin' Up! (SU) Cherry Cobbler and Night of Navy. I used three different SU stamp sets to create the card, but the primary one was "Settin' Sail". The sentiment was from "Honeycomb Hello", and the compass was from "The Open Sea".Since this stamp set doesn't have matching dies, I used my Brother Scan N Cut2 to scan the stamped images and cut them out with a 0.04" white border.
I decided that white eyelets would look really nautical, so dug into my closet of less-used craft supplies to find the eyelets, and the Clicket to set them. I used a hole punch to create the holes the eyelets fit into. I realized that I haven't used eyelets in at LEAST 3 years!!!! See, that's justification enough to hoard your craft supplies :-D
The 4-3/4" light blue panel was embossed using the SU "Seaside" embossing folder. After I had set the eyelets I realized that they protruded through the back of the panel too much to just glue it to the card base, so I used adhesive foam strips to mount the panel.While the card assembly required several steps, making it wasn't that difficult. I would rate its difficulty as a "3" out of a possible "5".