WWC214 - Marsha's "All About Occasions" Challenge 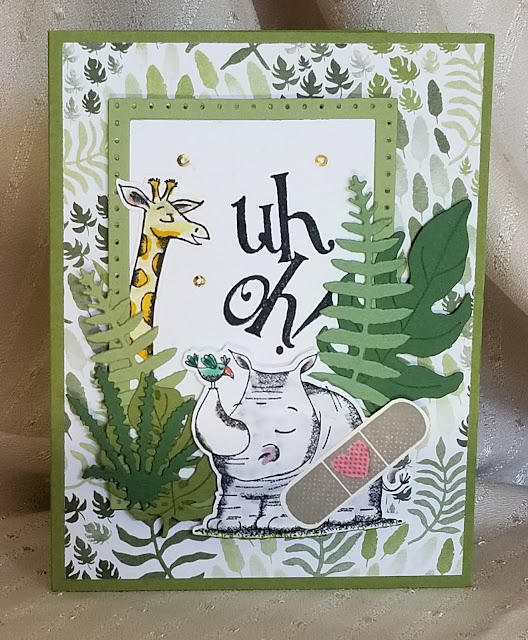 It's time for WWC214 - Marsha's "All About Occasions" Challenge! I decided to make a humorous get well card, with the poor rhinoceros having an "owie" bandage while his giraffe friend says "uh oh!"

The card base is Stampin' Up! (SU) Old Olive, the main leaves panel is SU's Botanical Gardens Designer Series Paper. The central framed image was created with Sizzix Dotted Rectangles. I cut two nested rectangles to form the green frame, then cut a single rectangle of SU Whisper White cardstock for the background pane inside the window. The "uh oh" sentiment is from the retired 1997 SU "Everyday Expressions" stamp set, and was stamped with Memento Tuxedo Black ink. The rhino and giraffe were stamped onto white cardstock using Memento Tuxedo Black ink, then hand colored with retired SU Stampin' Write markers (RHINO: Going Gray, Pale Plum; BIRD: Mint Melody, Glorious Green, Only Orange; GIRRAFE: Barely Banana, Summer Sun, Creamy Caramel).The green rectangle frame was glued onto the white rectangle, and the giraffe was glued on with the end of his neck tucked under the side of the frame. Before the rhino was glued to the frame, an assortment of foliage was die cut with two different die sets. The broader leaves from the SU "Botanical Builder" set first had the "ribs" of the leaves stamped, then die cut. The Sizzix ferns were simply die cut without stamping. All were glued onto the lower part of the frame using Tombow.The rhino was attached to the frame using adhesive foam strips. His bandage was stamped using the SU "Patterned Occasions" set using SU Crumb Cake ink on Crumb Cake cardstock. The heart was colored with an SU Pretty in Pink Stampin' Write Marker.After decorating the framed panel, it was attached to the card front with adhesive foam strips. A double layer of foam was used Where the rhino's feet extended beyond the frame.This would make a great get well card for just about anybody - even kids!I am rating its difficulty level as a "3" because of all the steps needed in its creation. No particular step was difficult, just took time and patience. 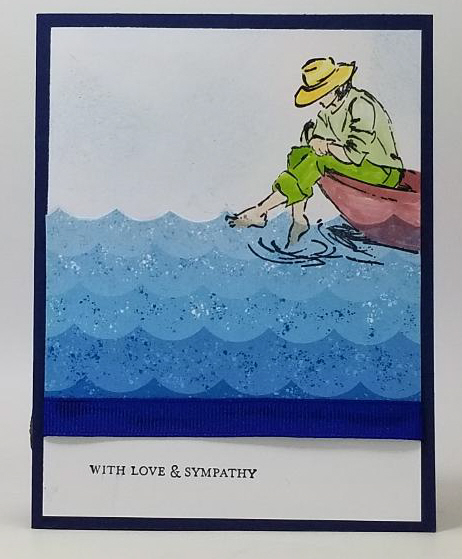