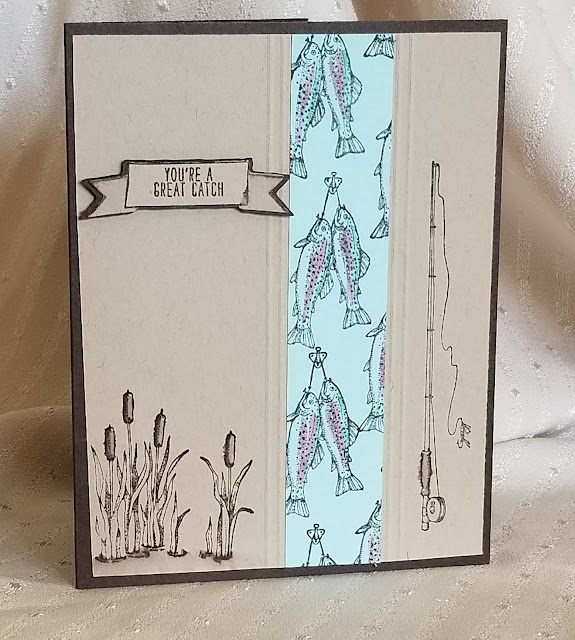 This masculine card was made as a Design Team card for Watercooler Wednesday #213 - Karen's Masculine "Anything Goes" Challenge using a retired 1996 Stampin' Up! (SU) stamp set called "Fishin'".

The inch wide SU Pool Party cardstock strip was stamped with the string of fish from this stamp set using Memento Tuxedo Black ink. I colored the trout using SU Stampin' Write markers in Mint Melody and Pretty in Pink colors. On either side of the card front where the fish strip was going to go, I used a scoring board and score tool to put two scored lines 1/8" apart (scored from the back of the panel so the raised score line would be on the front of the panel). Then I glued the fish panel between the score lines.The cattails and fly rod were stamped using SU Early Espresso ink. I used a slightly damp Aqua Painter to drag the color of the cattail heads and the handle of the fishing rod in toward the center of each. This gave a slight brown tint to the heads and handle.For the sentiment, I used the banner and sentiment from the SU "Settin' Sail" photopolymer set, aligning the two with my SU Stamparatus. I then scanned the stamped banner with my Brother ScanNCut2 digital cutter, and cut the banner with no outside borders. Then using the scanned image, I added 0.08" border around the outside of the banner shape, and cut a second banner on SU Early Espresso cardstock to form a shadow or matting around the original banner. The two were glued together, then mounted on the card front using adhesive foam strips.This masculine card could be used as a birthday, lunchbox, anniversary, or non-traditional Valentines card.I am rating the difficulty level of this card as a "2" out of a possible "5". The banner is such a simple shape, that it and the brown mat could be hand cut if you don't have a digital cutter.