WWC208 - Charlotte's "All About Occasions" Challenge 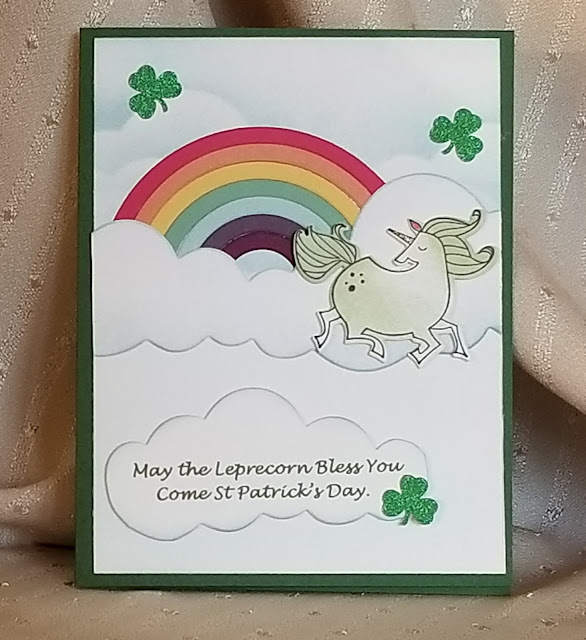 This card was made as Design Team inspiration for WWC208 - Charlotte's "All About Occasions" Challenge in which the theme was "all about occasions".

I had seen a rainbow and unicorn card on Pinterest by Sacha van der Kerkhof that had inspired me. I thought a play on the word "unicorn" would be fun to do, so using the Stampin' Up! (SU) "Magical Day" stamp set, I stamped the unicorn using Memento Tuxedo Black ink, then sponged him lightly with SU Soft Sea Foam ink (for a leprechaun look), and die cut him out using the matching SU "Magical Mates" framelits die. I used Gold Wink of Stella to color his horn (as befits a Leprecorn at the end of a rainbow!)

The soft-colored rainbow was created using the following SU cardstock colors for the ROYGBIV bands:   Melon Mambo   Groovy Guava   So Saffron   Mint Macaron   Soft Sky   Perfect Plum   Rich RazzleberryEach was die cut using SU "Rainbow Builder" framelits dies. I held them together with 3 pieces of Scotch tape on the back until I was ready to place the rainbow permanently on the card,Before gluing the rainbow in place, I die cut one of the clouds using the same rainbow die set from a piece of scrap cardstock, then used it as a mask to sponge several layers of clouds using SU Soft Sky ink onto the main SU Whisper White cardstock panel. Then I glued the rainbow slightly off center using Tombow liquid glue. I then used the same cloud dies and cut a long section of cloud from another piece of white cardstock. Using a craft sponge, I sponged the edges of the cloud with SU Soft Sky ink. The cloud was then glued down over the rainbow. Where the cloud would be attaching to the sponged cloud panel instead of the rainbow, I used a Mini Glue Dot to maintain the same level off the panel (a glue dot is about the same thickness as the cardstock used for the rainbow). Paper snips were used to trim the cloud where it extended beyond the main panel.The unicorn (aka Leprecorn) was attached over the cloud using adhesive foam strips to give him a more "floating above the clouds" look.With such a made-up word as "Leprecorn", I wasn't going to find the sentiment stamp I needed, so I used my computer to print out my sentiment in a dark green ink color onto white cardstock. I then used the clouds dies again to make the sentiment appear as part of the sky. This was also sponged around the edges using SU Soft Sky ink. I mounted the cloud to the main panel using adhesive foam strips.Finally, to give the card an extra St. Patrick's Day look, I punched three shamrocks from DCWV "Holiday Glitzy Glitter" stack glitter paper. These were attached using Mini Glue Dots.The finished panel was glued to the SU Garden Green card base with Tombow.I think this card will make the perfect St Patrick's Day card for my 6-yr old grand-daughter!I am rating the difficulty level of this card as a "3" out of a possible "5" due to the many steps, and the work required for the rainbow.