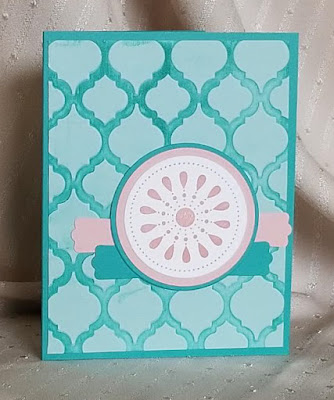 This card was made for two card challenges:
Color My Heart Color Color Dare #324 - TicTacToe with Color Palette of "Oh What Fun"  Using the right-hand vertical column (lagoon - mint - pixie). 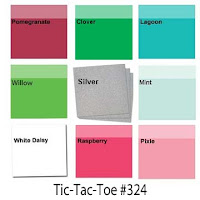 The card base is 5 1/2"x 8 1/2" Stampin' Up! (SU) Bermuda Bay cardstock folded in half. The front panel is a 5 1/4" x 4" piece of SU Pool Party cardstock that was embossed using the SU "Modern Mosaic" embossing folder that had been inked with SU Bermuda Bay ink before placing the panel inside. The embossed panel was glued to the card base using Tombow.
The sketch's required round element was created by stamping the SU "In the Spotlight" using SU Blushing Bride ink onto SU Whisper White cardstock. It was then die cut using a Sizzix circle die. A slightly larger circle die was used to create a pink mat from SU Blushing Bride cardstock, then an even larger circle die was used to cut a mat from SU Bermuda Bay cardstock. These three circles were glued together with Tombow, but before adhering the stamped circle, I backed it with a slightly smaller chipboard circle to add depth as a complement to the raised embossed main panel.
Before gluing the matted stamped circle, I punched out two SU "Modern Label" shapes - one from SU Bermuda Bay, and the other from SU Blushing Bride. I cut these in half so that their ends could extend beyond the circle as required by the challenge sketch. These were temporarily attached to the back of the circle element using a Recollections Repositionable tape runner to allow me to get them aligned correctly, then the entire circle and labels were glued permanently to the card front using Tombow.
The hardest part of making this card was getting the embossing folder inked correctly since there are such broad flat areas in the design. The rest was really easy. So I am rating the difficulty level as a "2" out of a possible "5". The card can be used for birthdays, thank yous, or thinking of you occasions.