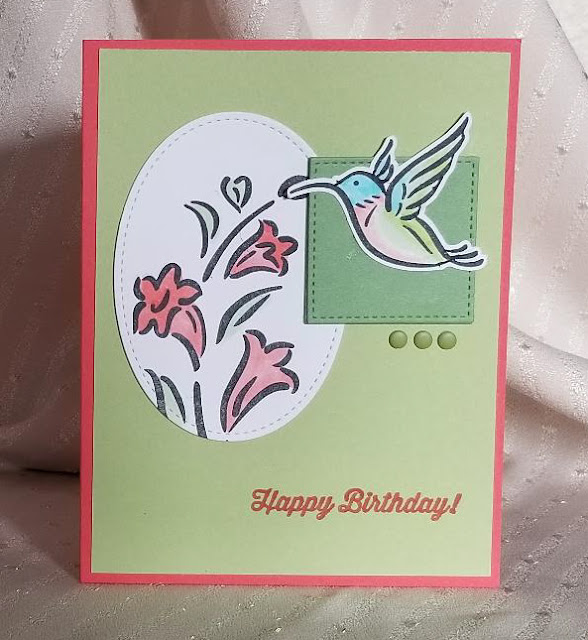 My first card of the new year is inspired by three different challenges:Double Trouble Challenge #18:

I chose the great sketch from Atlantic Hearts Sketch Challenge #297: 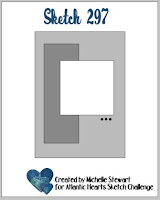 The third challenge that inspired me was Always Fun Challenge #91 with their "anything goes - something new" theme (since it's January, I feel that birds and flowers definitely mean "new"!

Using the AHSC challenge sketch, the DT challenge shapes and theme, and the AF "something new", the card started coming together. I hadn't used my 2004 Stampin' Up! (SU) hostess "Brushstroke Hummingbird" stamp set in what seems forever! It's one of the few bird stamps I have, so I started with that. I liked the idea of having him "fly" out of his shape, so stamped him in Memento Tuxedo Black ink onto SU Whisper White cardstock, then colored him with a variety of Copic markers before cutting him out, and mounting him on a square of SU Wild Wasabi cut with the SU "Stitched Shapes" die with Tombow glue.The flower stem was stamped from the same Brushstroke stamp set using Memento ink. It was colored with a subset of the same colors as the hummingbird. They were then die cut using an oval "Stitched Shapes" die. To give a little more depth to the card, a second oval was die cut and glued to the back before this sandwich was glued to the SU Pistachio Pudding cardstock panel.To raise the hummingbird up more so it appeared like it was flying above the card surface, I die cut two additional "Stitched Shapes" squares and glued them on the back of the hummingbird one, then glued it to the card front overlapping the oval.The AHSC challenge sketch had three embellishment dots on it, so I used SU Enamel Dots to my card front. I think it added a nice touch!The final touch was the sentiment from SU "Birthday Banners" stamp set. Because it was going to be stamped on a colored background, I knew I would need to stamp it multiple times. So, using my MISTI, I inked the stamp using the retired SU Stampin' Write Cameo Coral marker, I stamped it a total of five times to get it dark enough!I am rating the difficulty level of this card a "2" out of a possible "5" due to the need to hand color the hummingbird and flower spray. I liked the way it turned out, despite my typical avoidance of hand coloring :-)