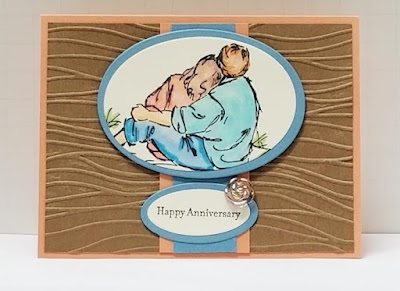 This card was made for Retro Rubber Challenge Blog #87 called "Let's Get Sketchy". 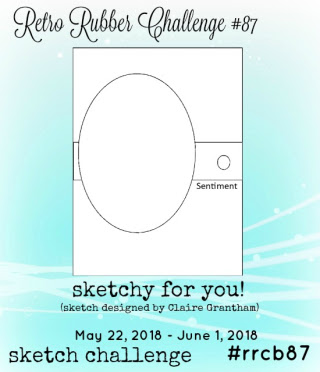 I chose to turn this week's sketch 90 degrees, primarily because I wanted to make an anniversary card, and love the Stampin Up 2004 "Summer by the Sea" set for warm memory type cards. The couple fit a horizontal oval much better than a vertical one.
My base is the standard A2 size cut from retired SU Groovy Guava cardstock, and folded in half. The brown panel is 5-1/4"x 4" SU Kraft cardstock that I ran through my Big Shot using the SU "Seaside" embossing folder. I glued the embossed panel with a liberal use of Tombow and then put it under a lightly weighted book to ensure it dried flat. This embossing folder embosses deeply in one direction, so it tends to curl the paper.
I stamped the couple using Memento Tuxedo Black ink (good to use when coloring with alcohol inks) onto SU Very Vanilla cardstock. Then began hand coloring it with Copic markers. Here are the colors I used:
Guy: Tuscan Orange (YR27), Light Suntan (E13), Baby Blue (B21),
Mint Blue (B01), Peacock Blue (B06)

Gal:Lipstick Naural (E04), Light Prawn (R22), Blush (R20)
Grass: Pistachio (G43)
I then used SU "Layering Ovals" thinlits dies to diecut the couple and the Blue Bayou matting.
Next, I needed the line element the sketch requires. So I cut a Groovy Guava strip 1-1/2"x 4", and layered on top of it an 1"x 4" Blue Bayou strip. They were glued together with Tombow. Then glued to the card front with liberal amounts of Tombow to ensure a good adhesion to the rippled panel.
The matted hand colored image was attached to the card using adhesive foam strips on either side of the vertical panel.
The sentiment panel was stamped onto SU Very Vanilla cardstock using the "Happy Anniversary" saying from the SU "Teeny Tiny Wishes" set (they are discontinued as of 2018, but I bought mine in 2009).
Again, I diecut the sentiment and it's Blue Bayou matting with SU "Layering Ovals" thinlits dies. These two ovals were glued together with Tombo, then glued across the vertical stripe element using tombow glue. I found a cute rose button in my stash, so used wire cutters and sanding paper to remove the loop on the back, and attached it to the card with two Mini Glue Dots.
I am rating the difficulty level as "2" out of "5" because of all the steps. None of the steps (except hand coloring) were particularly hard, there just a lot of them with all the layering, coloring, and texturing. I think this will make a great anniversary card for my brother and his wife next month! 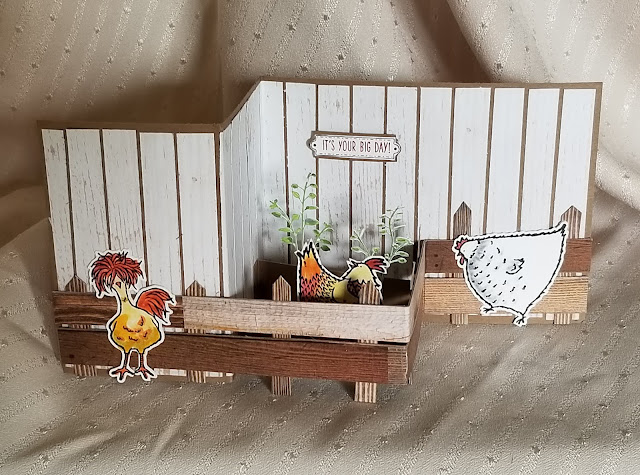 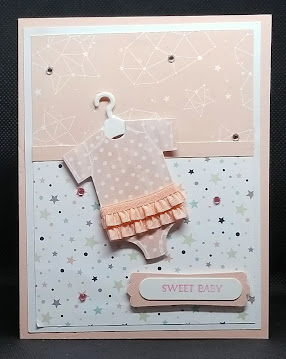