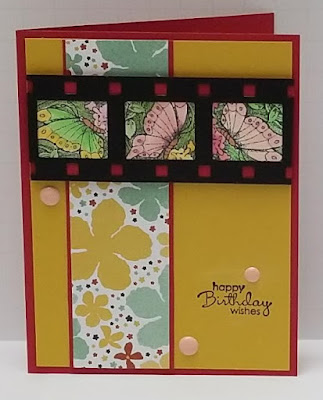 Design Team card made for Try Stampin' on Tuesday sketch challenge #364 with the optional theme of "butterflies". 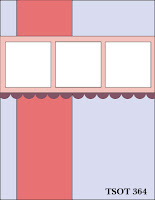 When I saw the sketch and theme, my mind immediately went to my seldom used Sizzix filmstrip die and the small butterfly stamp in the "Drawing on Nature" set. First I stamped 3 butterfly scenes, then colored them with my Copics markers trying to stay with the color scheme in the Stampin Up "Botanical Gardens" Designer Series Paper.I then die-cut the filmstrip from black cardstock. The three butterfly images were then arranged in three different ways within the three "film" windows, and trimmed so they were just barely larger than the window. I debated about making them large enough to also fill the background behind the tiny film feeder rectangles, but thought the contrast would be to great. After gluing the images to the back of the filmstrip, I then matted the strip with Cajun Craze cardstock.The card front is SU Hello Honey trimmed to 4"x 5-1/4". It was glued to the Cajun Craze card base with Tombow glue. The strip of "Botanical Gardens" DSP was matted with Cajun Craze, then glued to the Hello Honey panel.The matted filmstrip was attached over the vertical floral panel using adhesive foam strips to raise it above the card for added interest.The birthday sentiment was stamped with Memento Tuxedo Black ink using my MISTI to get it straight and since it had fine lines, to allow me to stamp it twice.Finally, I stepped out of my comfort zone and added enamel dot embellishments to match the butterflies. I generally don't do a lot of embellishments because I'm never happy where I place them (not matter WHERE I place them!) I love them on other people's cards, though. Weird, huh?I'm giving this card a difficulty rating of "2" out of "5" because of how easy it was. It got a "2" because of the need to trim the butterfly images so closely.