A Birthday Above the Rest 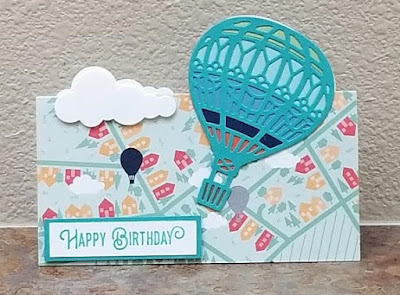 This card was made for Try Stampin' on Tuesday April Technique Challenge - Partial Die Cutting.
The challenge required that the card base be cut partially with a die ABOVE the fold line. When I started thinking about things that float up, the great Stampin' Up! "Up & Away" die set (retired) came immediately to mind. I wanted the card, including the balloon protruding above the fold line to fit into an A2 envelope, so cut my Whisper White Thick cardstock 6"x 5-1/2", and lightly marked the fold line with a pencil at 3". But DON'T fold it yet!
Place your die partially across the fold line (in my card, the balloon and large cloud), then place the top plate on your die cutting machine over what will be the BACK of your card up to, but not overlapping, the fold line. This will result in the die cut being only on what will be the back of the card.
Now, using your scoring tool, score only BETWEEN your die cut images (in my case, from the left edge to the cloud, then from the cloud to the balloon, then from the balloon to the right card edge). You can now fold the card and the pieces you die cut will be sticking up from the card front.

The balloon die cut is rather unique in that it has "holes" in it that need color, so I diecut a second balloon from SU Bermuda Bay cardstock, and backed it with die cuts that would show thorough using Pistachio Pudding, Pool Party Marina Mist, Night of Navy, and Calypso Coral. The basket was backed with brown Kraft cardstock. These were all glued on the back of the aqua balloon BEFORE the balloon was glued on top of the partial cutout balloon. Since I wanted to use the balloon "scenery" Designer Series Paper (DSP) on the card front, I glued that down with Tombow glue BEFORE gluing down the aqua balloon.

The same for the cloud, except I mounted it with adhesive foam strips, and offset it a bit from the partial die cut cloud to give it more depth.

The sentiment was part of a stamp from the SU "Lift Me Up" matching stamp set. It was inked with SU Bermuda Bay ink, and stamped onto Whisper White cardstock. This was in turn matted with a scrap of Bermuda Bay cardstock, and mounded o the lower left corner of the card front with adhesive foam strips to compliment the raised cloud shape.

Note, that since your partial die cuts were cut from the back of the card, you will probably want to glue a piece of cardstock inside your card to cover the die cut holes.

This card wasn't difficult, but did require some planning ahead of time. So I am rating it a difficulty level of "3" out of "5". It was a fun card to do!
Birthday Challenge: Try Stampin' on Tuesday Technique: Partial Die Cutting