Holiday on the Slopes 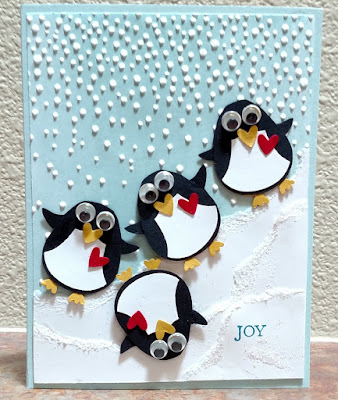 Holiday on the Slopes

This card was created for the #TGIFC68 sketch challenge: 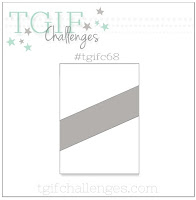 When I saw the sketch, it immediately made me think of a slope... which led me to a snow slope theme (Christmas is not that far away!).

The penguins were pretty straightforward. I used the owl "ears" that I had cut off the penguins' heads to form their little flapping arms.

The snowy sky was created by generously wiping Soft Sky ink onto the labeled inside of the Softly Falling embossing folder, then putting in my white cardstock and running it through my Big Shot. I think the 3D snowflakes give the card more dimension.

The slopes were created by tearing pieces of white cardstock, then rubbing the torn edges with Versamark ink and sprinkling with SU Heat & Stick powder. I melted the powder with my heat tool, then sprinkled the activated powder with Dazzling Diamonds and heated a second time to make the glitter stick. Be sure not to OVERHEAT the glitter or you will burn it brown, and have to start over. I glued the snow banks onto the card front, and trimmed from the rear of the panel to even up the edges.

The penguins were attached to the slope in various poses of slipping and sliding using Mini Glue dots (except the one landing on its head - him I used a foam dimensional to make him appear to be in front o the other penguins and falling.

The front panel was glued to the Soft Sky card base.

This was fun to do, and I think meets the sketch challenge to a "tee". Thanks to Sue at Me And Mine on Pinterest for the inspiration.
Challenge: TGIF Christmas Technique: Punch Art