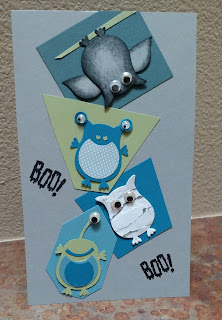 Made for two card challenges: 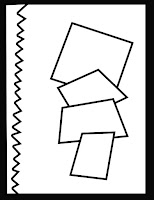 Sunday Stamps Challenge #133: http://sundaystamps.blogspot.com/ that required the use of at least three of six challenge colors including shades of blue, a green and a gray. 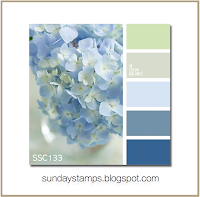 Halloween is coming and I've seen so many cute monsters that I had to try and create some of my own. The sketch challenged lent itself to this since it had 4 shapes stacked atop one another. When I saw that torn paper was one of the sketch requirements, I just knew that I had to include a ghost made form torn Whisper White paper whose edges had been accented using Smokey Slate rubbed along the torn edges. I just did all the tearing, then after rubbing both edges of each torn strip, I glued them down on white cardstock and punched out the "ghost" using the Owl Builder Punch.

The Owl Builder Punch became my unifying theme for the card. So I tried to think up crazy variations using the SSC challenge colors using all five colors! The circle punches were used to make the "tummies" of two of the monsters. The one-eyed guy on the bottom had his antenna made from the tree limb in the Bird Builder Punch. I snipped all the leaves off except the last one which formed the base for the eyeball. The nostrils on the little guy in the green trapezoid were made from the smallest dots of the Owl Builder Punch, which I then punched out just a tiny bit using a small hole punch.

All in all a fun card to make, and my 4 yr old granddaughter will REALLY like for Halloween this year!